The side deck space outboard of the cockpit coaming is pretty narrow and this is particularly noticeable . when going aft to the back yard of the Brewer.   My boat  has a full cockpit enclosure that is unnecessarily  wide at the back of the cockpit so moving  aft without a solid handhold  was sometimes more interesting than I would prefer .    I wanted something more supportive than the cable lifelines so I decided to add rigid SS rails, creating a hybrid cable/rigid tubing lifeline system.   It is not uncommon on serious cruising boats to have rigid stern pulpits that extend farther forward than normal stern pulpits, but these often require very expensive custom fabrication.  Some boats, like the Amel, come with rigid top rails all round.

Using heavy wall (.065 thickness) 1” SS tubing and standard fittings, I installed top rails from the stern pulpit forward to the existing rails at the side gates.   The existing gate rails are about 1 ½” below the  lifeline cable, so I used this as the height for the new rails. This spacing is necessitated by the taper at the top of the stanchions, but it also allows for the SS rail to be grabbed separately from the cable or together with the cable, which I left in place.   I also added a lower rail between the pulpit and the next forward stanchion thinking that the added structure will be a good place to attach all those miscellaneous things a cruising boat needs, such as fenders, fuel tanks, etc.

I used Seadog brand SS hardware (Hinged Jaw Slides with Bolt, 4-Way Rail Tee Connectors & Top Caps with eye end).     The available standard hardware needed a few simple modifications.  Because of the taper of the stanchion tops,  the top leg of the SS four-way rail tee connectors were too long.   I used a high speed angle grinder with a thin cutoff wheel to cut off about ¼” of the top leg and then sanded and buffed it smooth.   To make it more structurally sound, I replaced some of the set screws with round head screws which I screwed into the underlying SS tubing or stanchions.    For those fittings with only one set screw, I added an additional hole in the fitting for a screw.   I drilled and tapped the underlying tubing or stanchions for the screws. This was the most difficult part of the entire project.  I used the set screws to first create a dimple, then drilled and tapped it with a high-quality bits and taps.  Stainless can be difficult to drill, particularly with a hand drill and if the bit isn’t sharp, it heats up and the SS work hardens, so good quality,  sharp bits and taps are important.

I liked the results of the aft section of the boat, so I decided to extend the rigid top rail all the way around the boat.  It looks a little clunky, but it sure makes for more positive handholds.  Like the stern, I added a lower rail between the bow pulpit and the first stanchion aft.   The system seems to be strong and provides something solid for aging sailors to grab onto or lean against as we move about the boat. 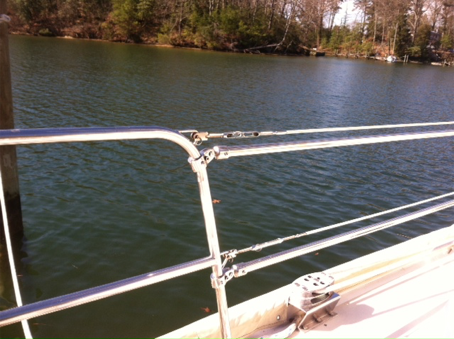 Upper and lower rails attached to the stern pulpit with hinged jaw slides. 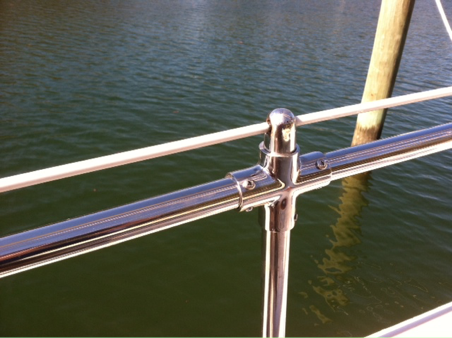 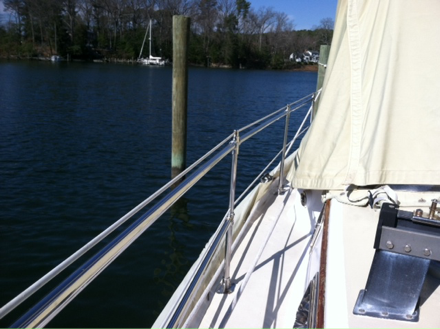 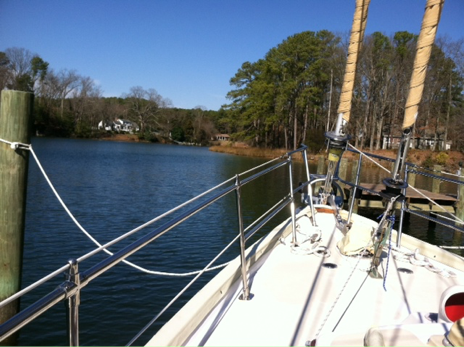 New rigid rails now go all the way to the bow.