Every Whitby owner sooner or later, if they keep the boat long enough, will have to deal with the center fuel tank issue. The tank was dropped into the cavity in the keel during construction and surrounded by foam. Invariably the foam gets wet and slowly the tank corrodes. Some owners have decided to ignore the tank and not use it, and several others have replaced the tank with various techniques. One of the reasons we purchased Allegria(199) in 1994 was the large amount of tankage and so we embarked on a plan to replace the tank and this is the story of how it evolved.

We had noticed water intrusion in the center tank early on in our experience with the boat and I found several small holes in the top of the tank forward of the access plate and glassed over them and for several years we had no further problems. 2 years ago we had a large accumulation of water again and I found a quarter sized hole in the top of the tank just aft of the original glass work I had done years ago. I pumped all the fuel out of the tank and patched the hole and left it empty for a year. It didn’t collect any water so we put 10 gallons of fuel in and sailed a leg from Cape Fear to Beaufort  this past year and found no water. We then put 50 gallons in and sailed from Beaufort to St Mary’s River and tested the tank and found a large amount of water again. We then decided to further investigate replacing the tank.

Gerry and Leon have documented replacing the tanks via the engine room with the engine out of the boat on their blogs, The Incredible Hull and Bombora, respectively. Gerry used 2 smaller tanks with a sump in between and Leon built an integral tank with epoxy into the keel. Both were elegant solutions and are well documented in their blogs. At least 3 or 4 other owners have replaced their tanks with a window in the side of the keel, and since we didn’t need to pull our engine that is the route we decided to take. With advice and support from John Cece and Ted Schrimpff who had done the job, we screwed up our courage and hauled in Titusville to begin the process. We had copied photos from John, which he had taken during the replacement of his tank which helped tremendously.

We started by sounding the keel with a mallet to outline the boundries of the tank. These were marked on the keel and I drilled small holes at the lower corners allowing a large amount of foul smelling water to be released. I then drilled larger holes with a hole saw to allow a screw driver to be inserted to further establish the boundries of the tank. I found that I needed to extend a bit further than noted on the soundings. We then made cuts through the fiberglass wall from hole to hole. I used a small circular saw. The fiberglass panel was then removed exposing the foam. It was also removed to expose the tank. I had visions of removing the tank in one piece, but soon determined that was impossible due to the size of the tank, and so began to cut it into pieces with a sawzall. Surprisingly, the tank was intact at the bottom and all the holes were in the top and at the junction of the top and sides. We found the tank had been installed with no covering over the top which allowed water to enter the foam around the tank. The out side of the tank was corroded, but the wall thickness was good everywhere except at the top, which is different than others have seen. Most have reported many small holes at the bottom of the tank. Also of note was the bottom forward and aft of the baffles was covered with an inch or two of asphaltine, since it couldn’t be accessed to clean.

Once the tank was removed and the remaining foam cleaned out, we did a close inspection of the cavity and found the top open to the bilge except where I had done the fiberglass repair. I decided to create a roof to the cavity by glassing in pieces of quarter inch fiberglass sheets and forming an opening for the inspection plate and tank plumbing. I then created and floor for the new tank and a sump for water accumulation. To do this I glassed in two small bulkheads leaving a 12 inch space under the access opening and filled the floor of the cavity with an epoxy sand mix that Gerry described in his blog. I also used smooth river stones to take up space in the epoxy resulting in less expense. I also created a flat floor in the sump area as well with the epoxy/sand mixture.

We then plumbed in two strum boxes and hoses to pump out the sump if water accumulated there. The strum boxes sat in the flat floor of the sump, one as a spare incase the original fails for some reason since the area will be inaccessible. The hoses traveled up the port side of the cavity and through the floor and into the engine room where they were attached into the pumping system.

Careful measurements were then taken of the cavity to allow construction of a new tank. We planned to have air space all around the tank and have it supported by strips of Coosa board which is rot proof and will not absorb water. The Coosa board was bonded to the tanks with 5200 in a manner to not allow any water to get between the tank and the stringers and the stringers were glassed onto the sides of the cavity. This resulted in an air space around the tank to prevent corrosion and also resulted in the tank being well supported. The tank was also coated with an epoxy barrier to help prevent corrosion. We had a couple of hiccups in the positioning of the access plate, but once all was done and the plumbing attached we were ready to glass the panel back in and close the window.

The panel was glassed back in with filled epoxy and then the joint was ground out about six inches on each side. The layup schedule for the glass work used about 15 layers of alternating roving and mat with 3 layers of biaxial cloth, resulting in a very strong repair. The outside was then faired and the bottom painted and we were ready to fuel up and go sailing.

The new tank capacity is around 75 gallons, down from 85 in the original, but hopefully it will outlast me. Review of the series of photos will be very instructive for those interested in doing this project. Thanks to Gerry, John and Ted for their advice and informational help, which resulted in a successful outcome. 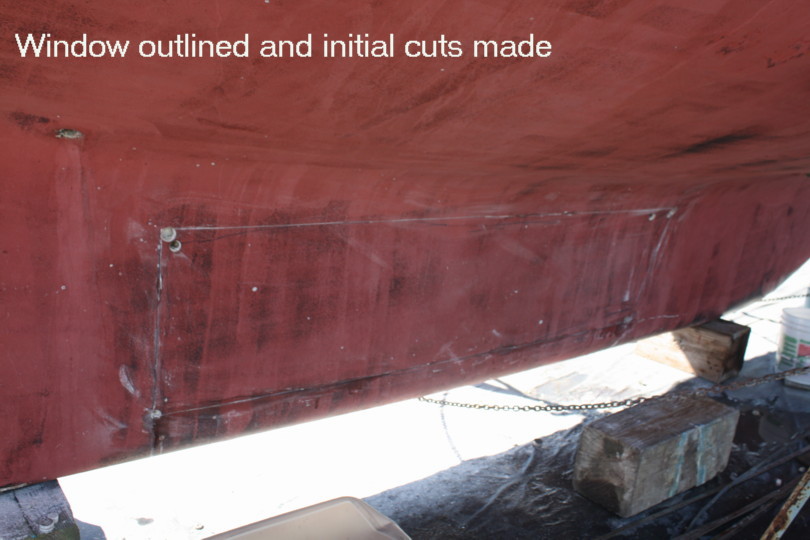 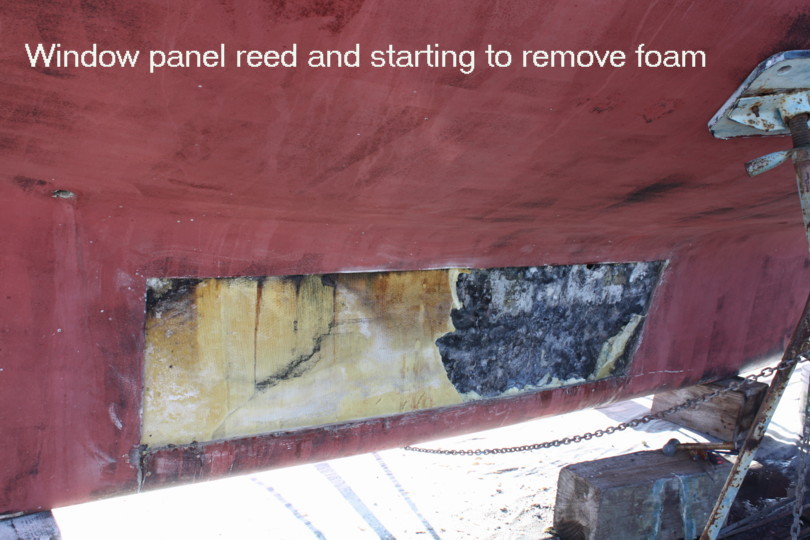 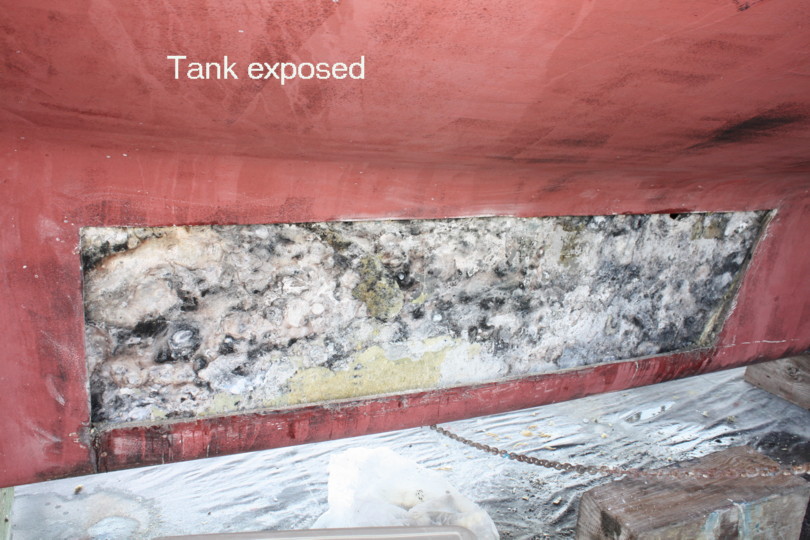 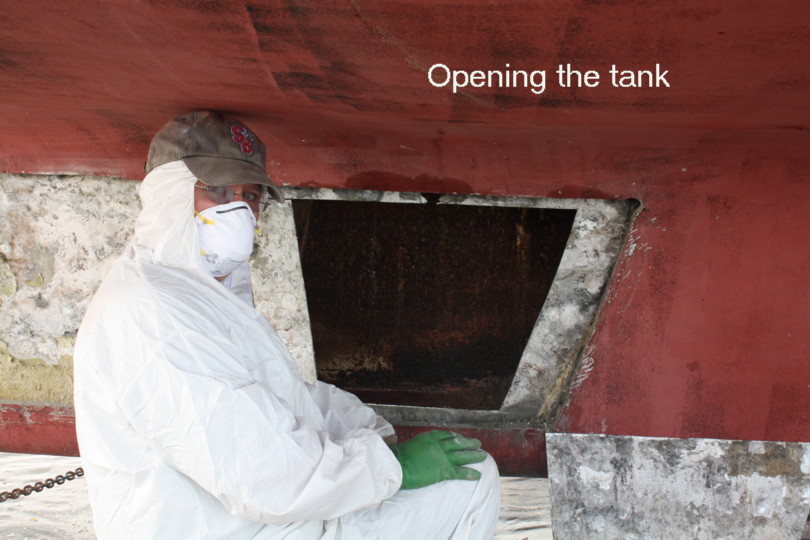 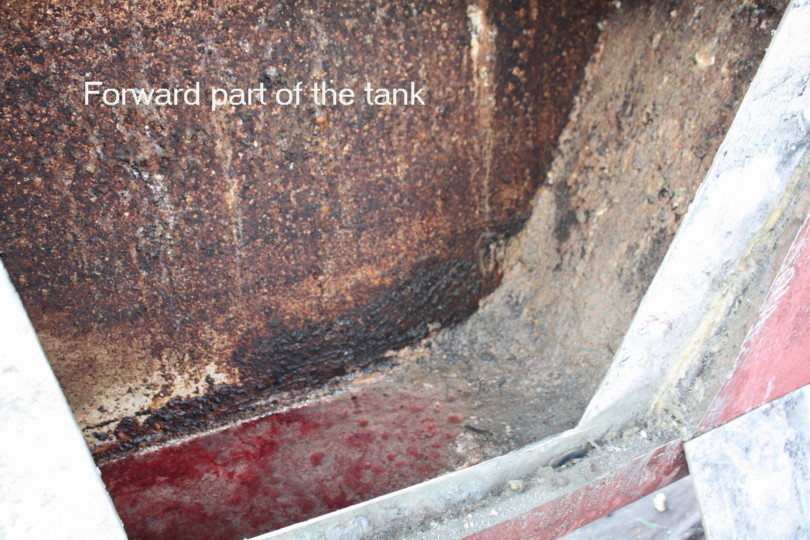 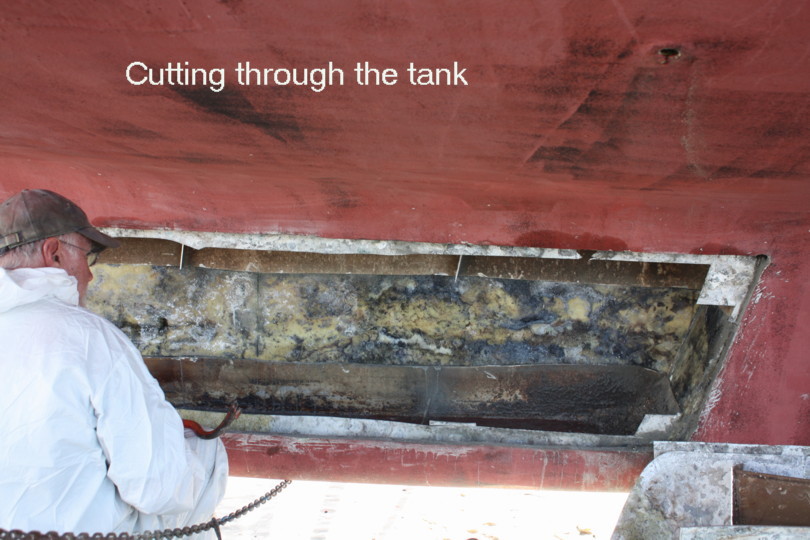 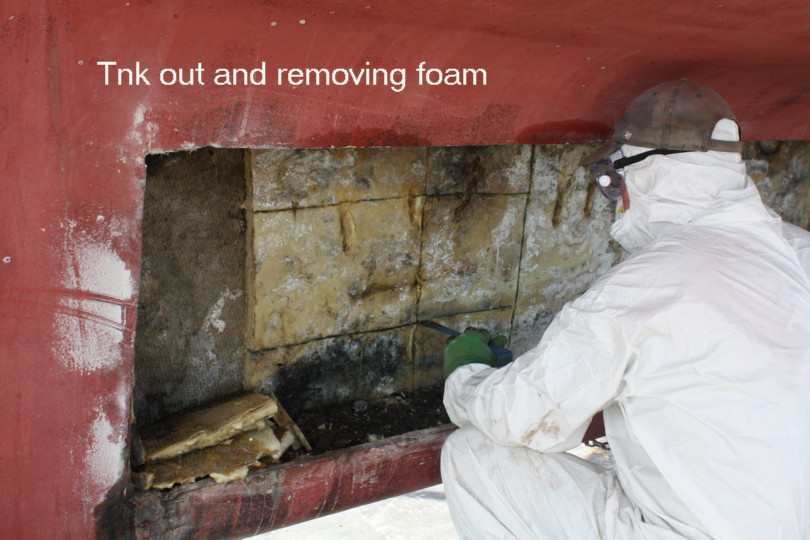 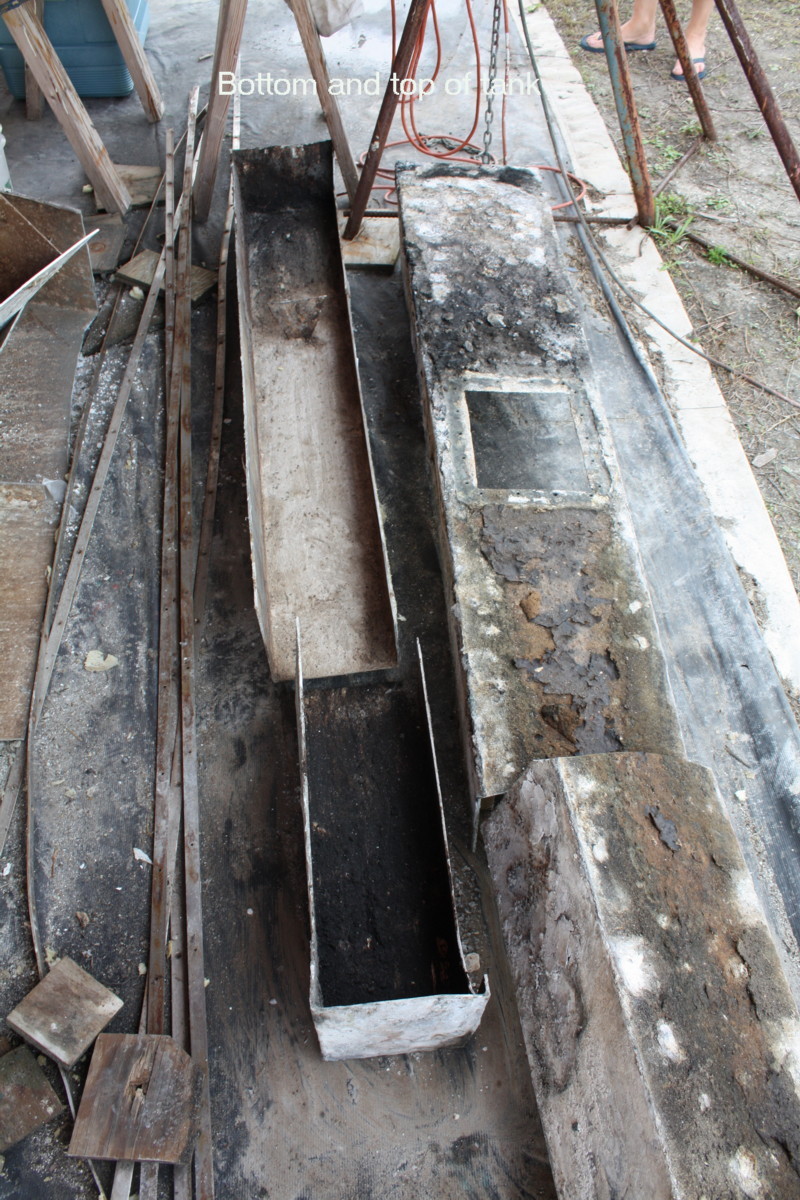 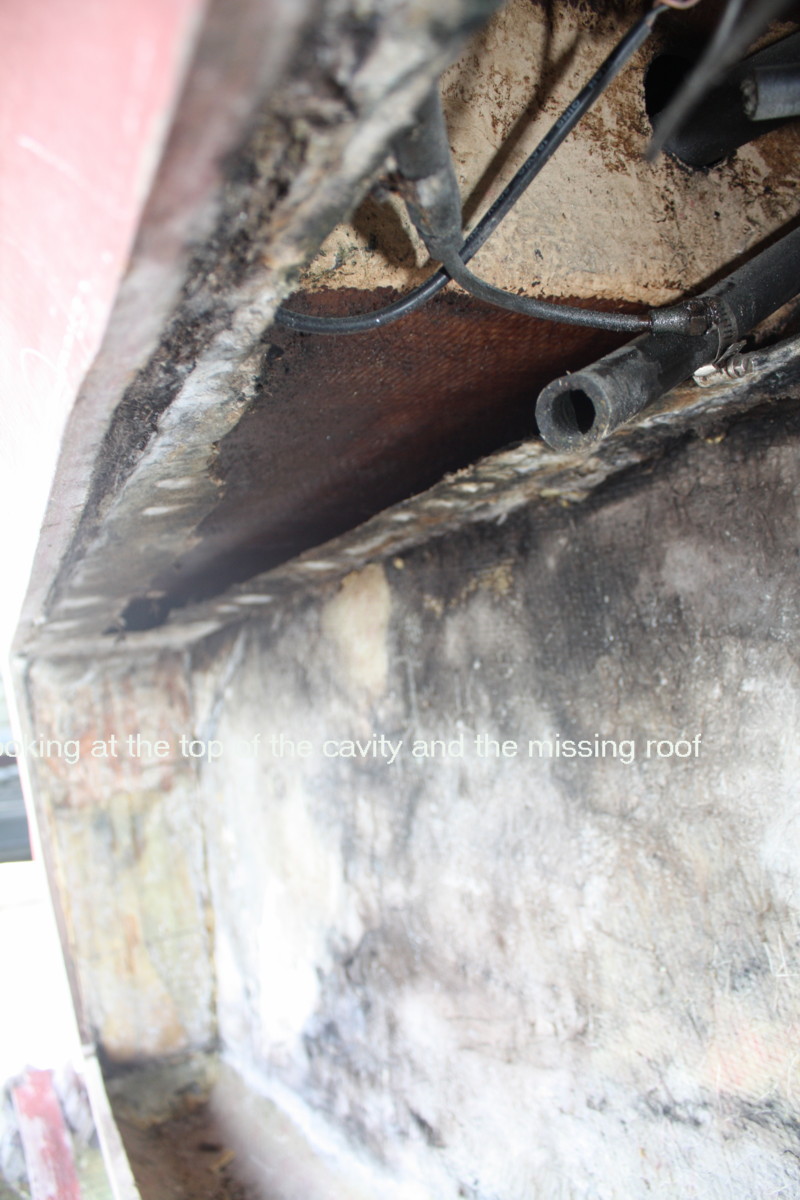 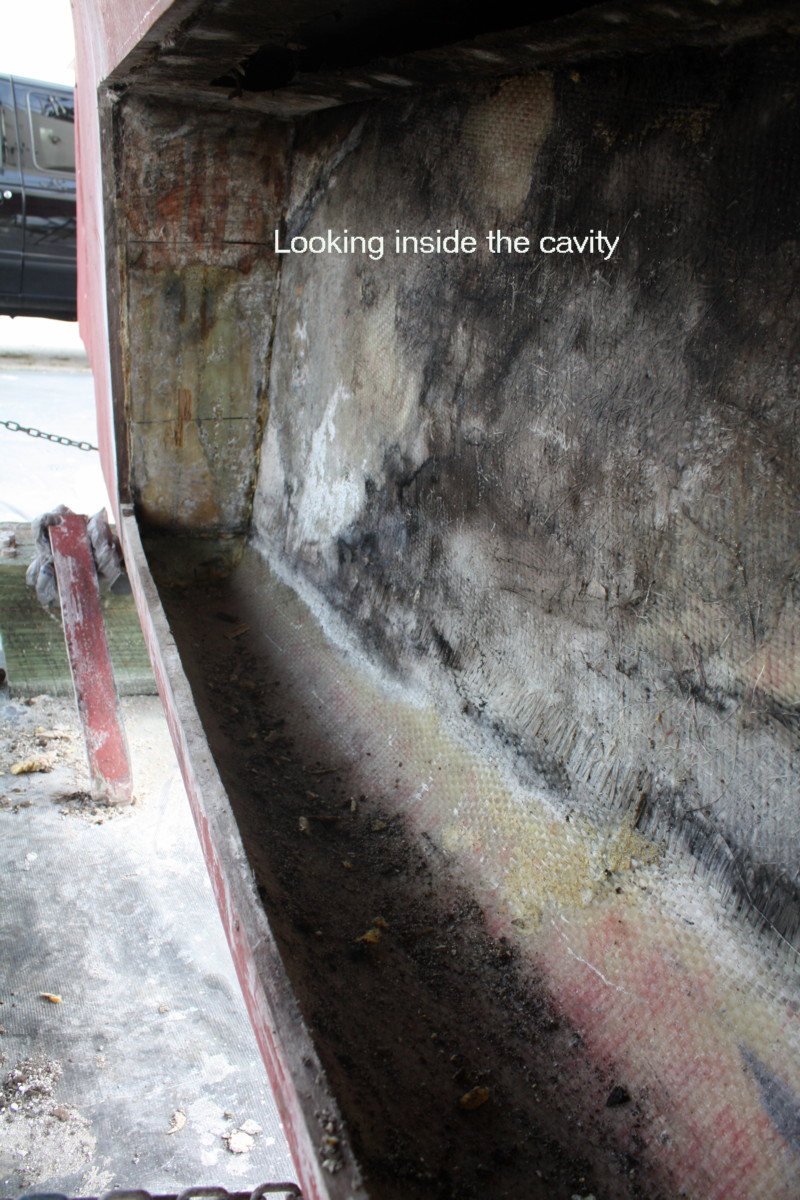 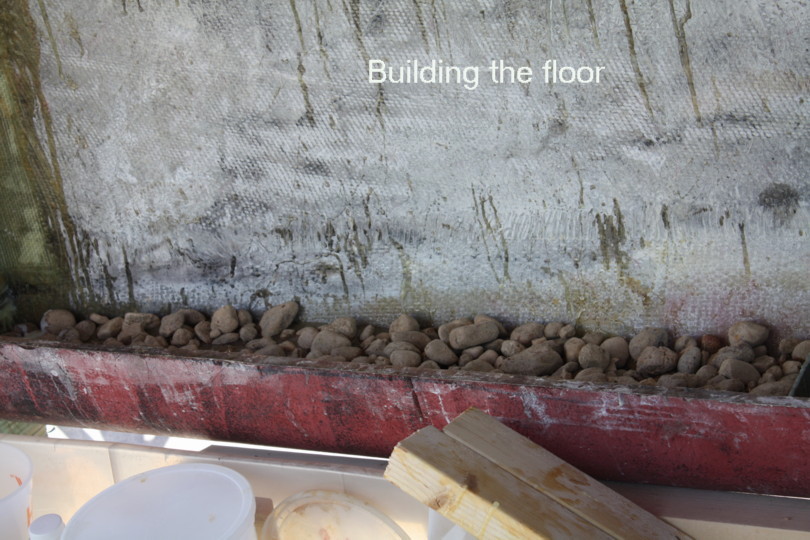 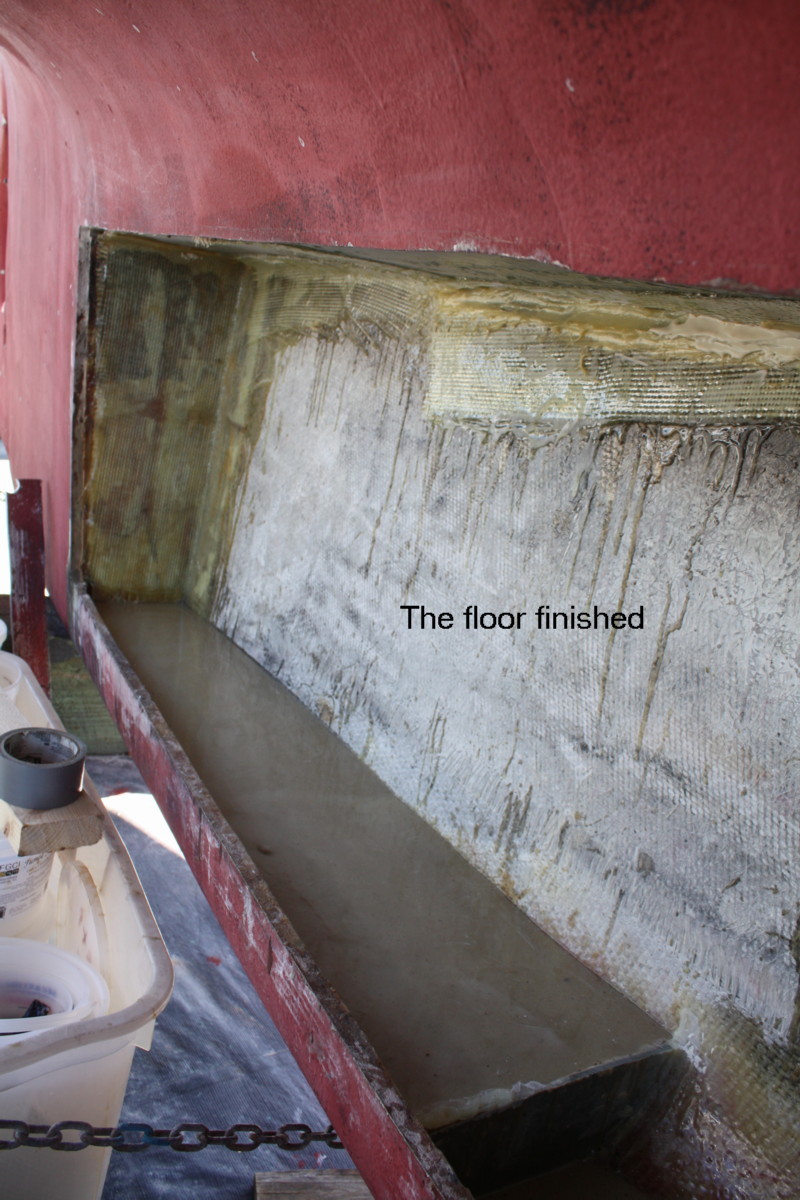 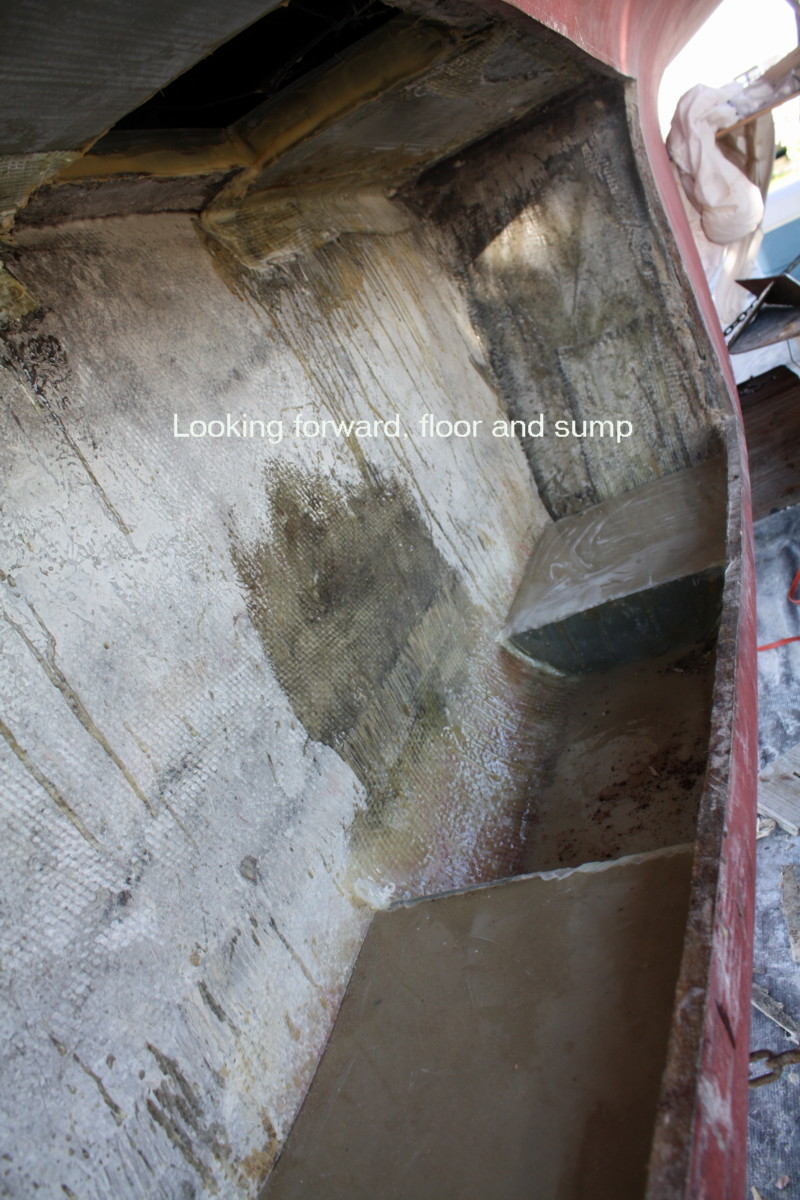 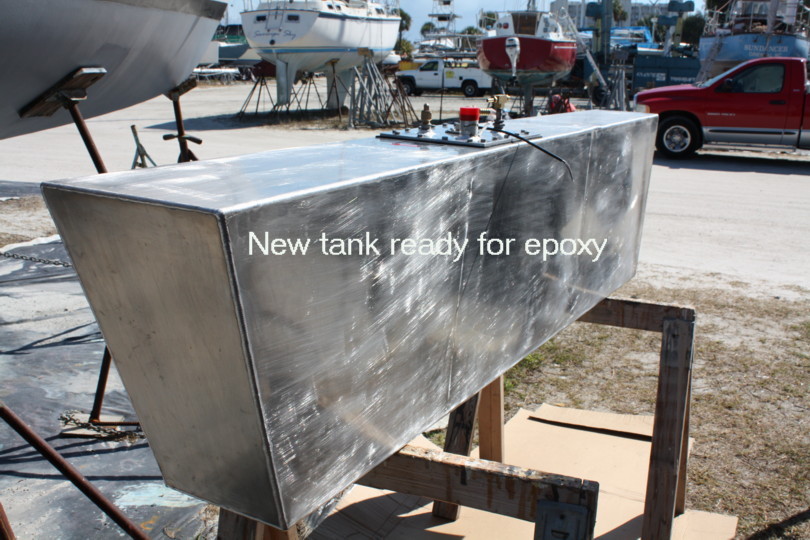 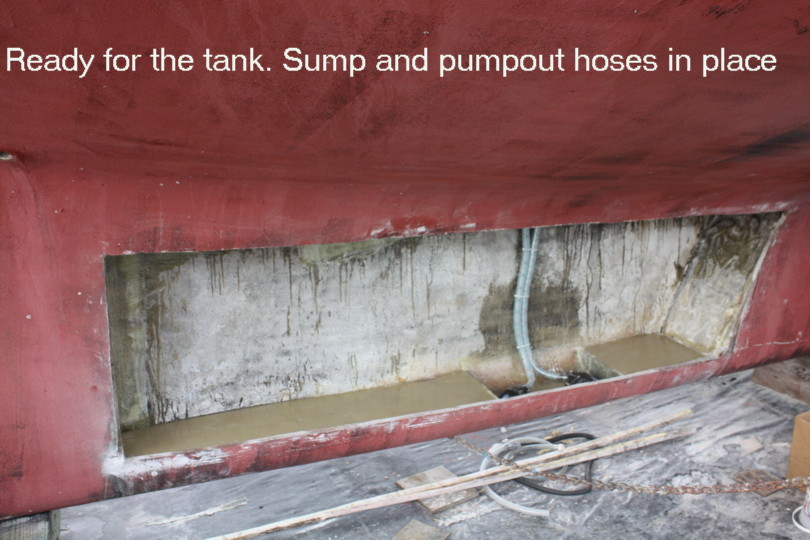 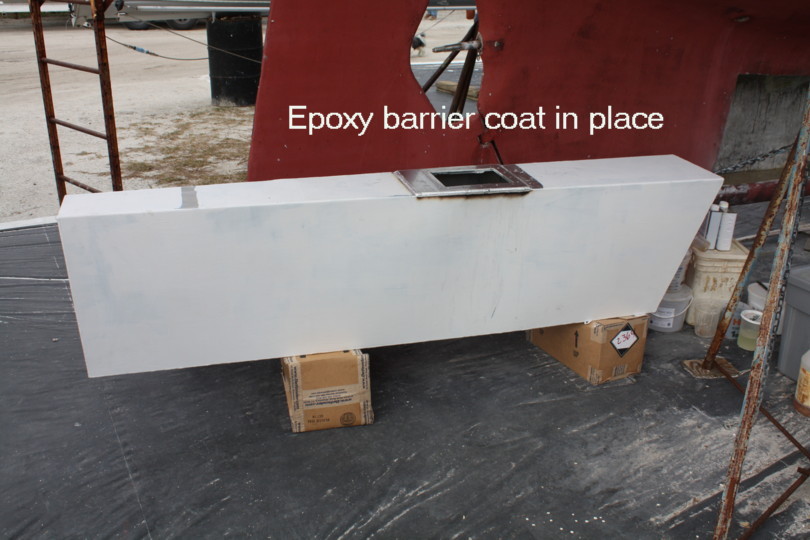 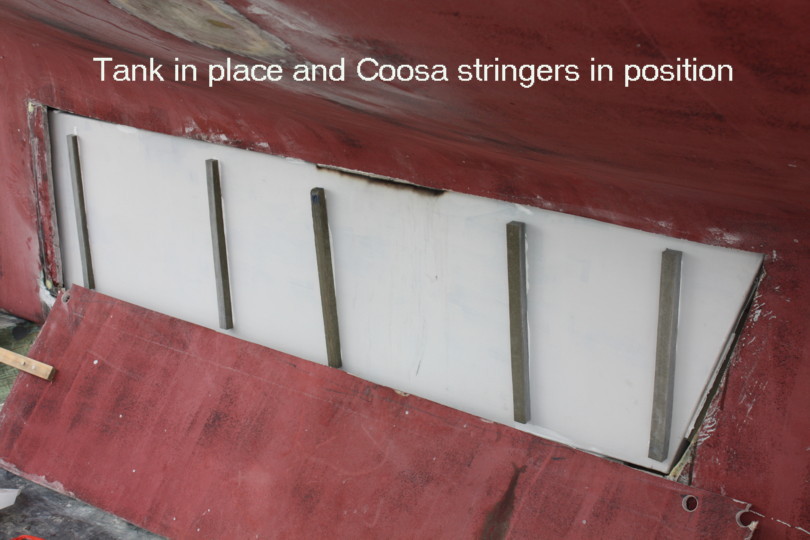 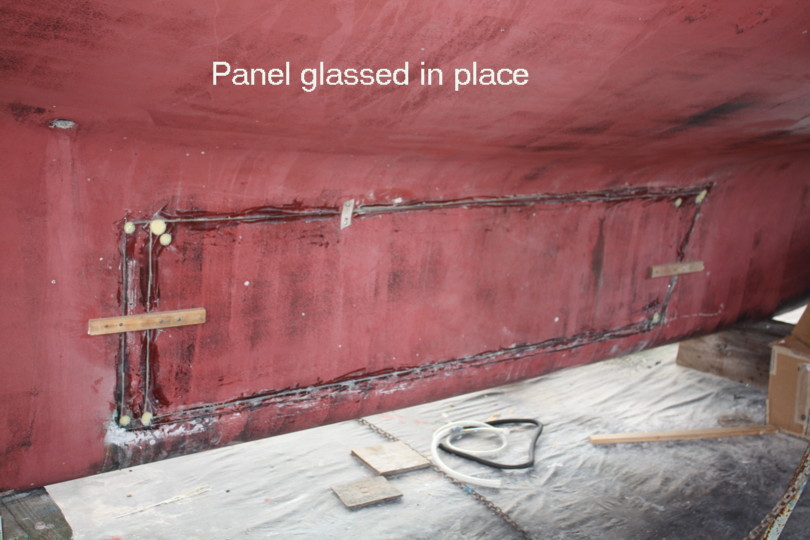 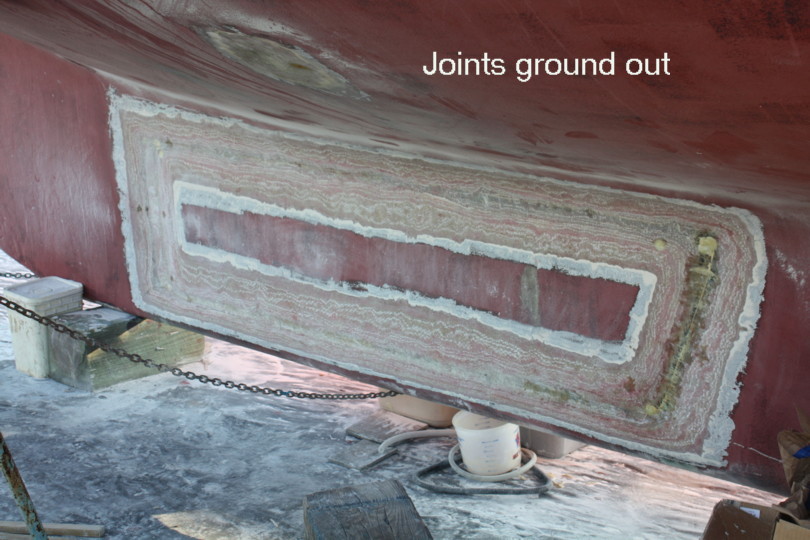 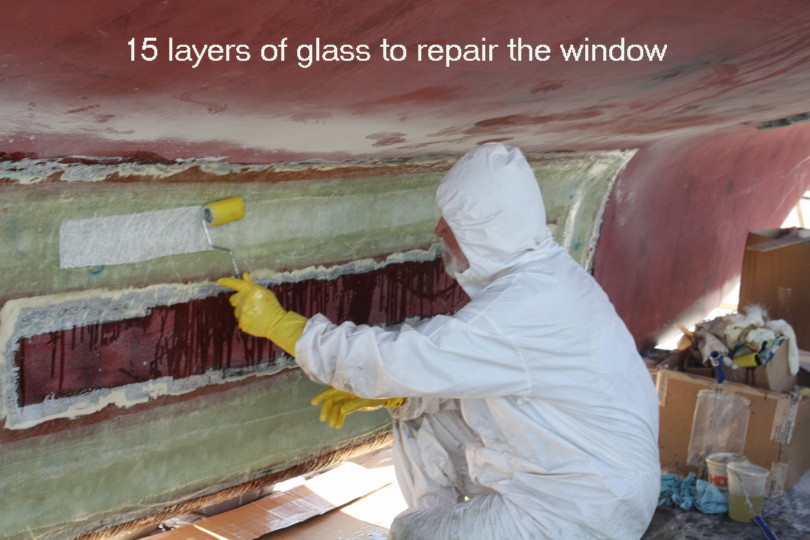 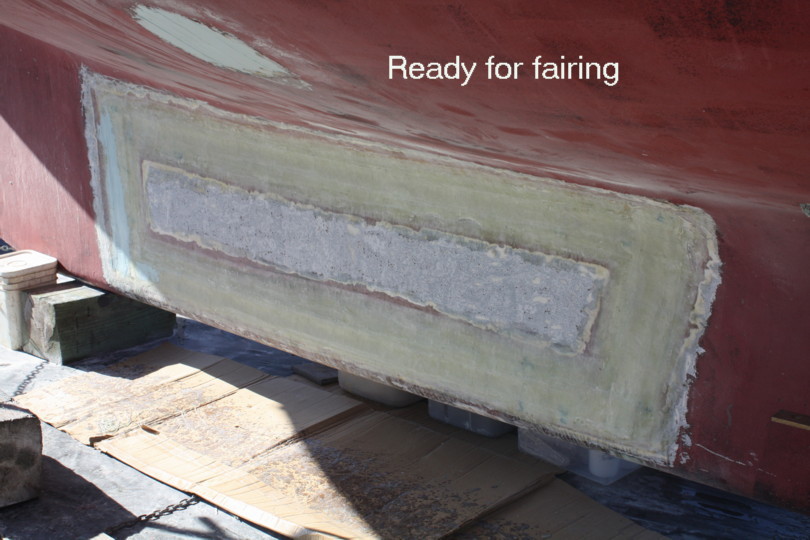 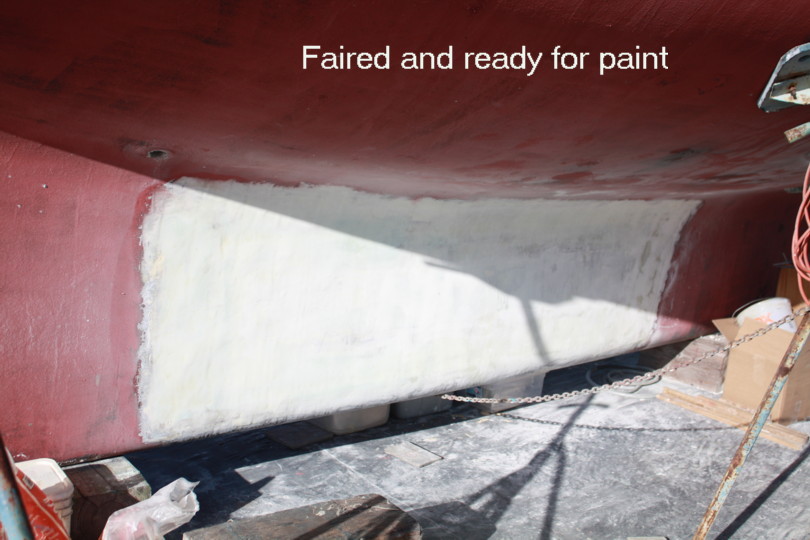 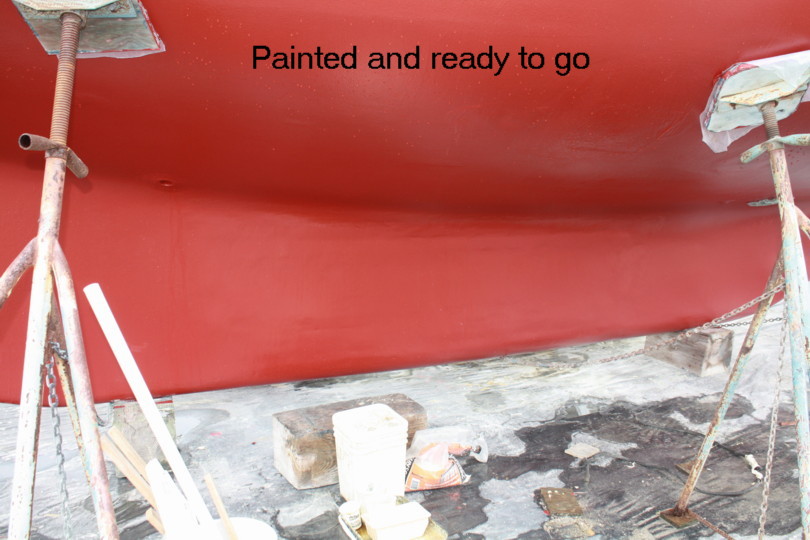